Police. Everything happens lightning fast. Nightsticks hit bare skin. Three men in the back of a pickup; they will be spending the night in prison. A shadow jumps from the bushes. It runs across the freeway, almost colliding with a truck, before finally disappearing into the protective canyons between the buildings.

»There’s so much prejudice, and nobody’s interested in what’s really going on.« Juan Carlos, 28, kicks at the dusty ground. His dark eyes look tired, his clothes are dirty. »We’re not criminals,« he adds quietly. Cars zoom past on the freeway, alongside the canal. Large numbers of tourists are marching over the bridge that connects the border crossing with the city centre. Tijuana. The past few decades have seen the Mexican city on the border with the USA gain a sad reputation; the drug trade, prostitution and illegal immigration have made it world famous. Juan Carlos originally comes from the south of Mexico, but the American dream has brought him all the way to Tijuana.

U.S. Department of Homeland Security estimates put the number of Mexicans living in the US as unauthorised residents at over 6.6 million. In the same year, almost 282.0001 of them were deported. They were taken through a simple gate in the border fence by bus, and released into the neighbouring country. »Up to 250 people are deported to Tijuana every day. In previous years it was even more, around 400 per day.« Victor Clark Alfaro sits in his small office directly opposite Tijuana city hall. Innumerable qualifications decorate the yellowing walls. He is a professor at San Diego State University and director of the Binational Center for Human Rights in the Mexican border city. »The people who’ve been deported don’t have any work. For many Tijuana is the end of the line, and it is gradually becoming a social problem,« he believes. 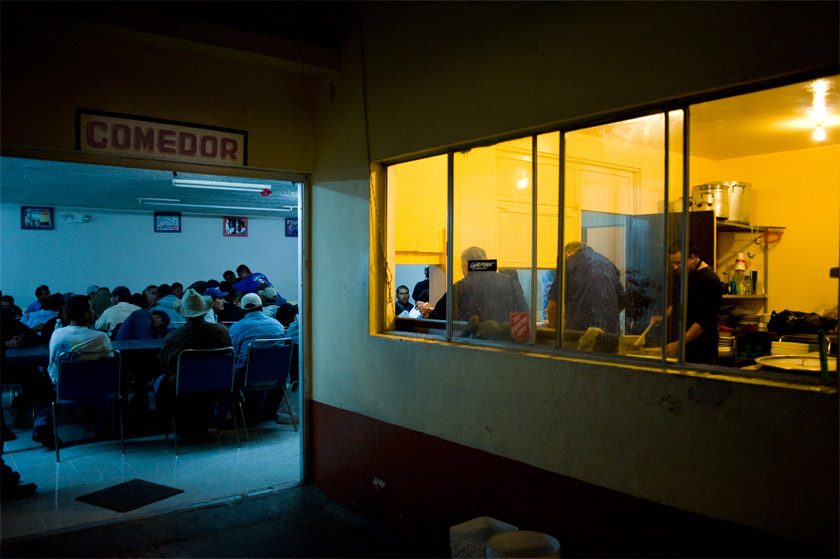 The overhead light in the dining room doesn’t provide a lot of illumination. Volunteers are putting food in bowls in the small kitchen. Dark silhouettes sit at the tables and slurp refried beans. »Our organisation’s finances are severely limited, which is why we can only offer a place to sleep, a shower, and warm food for the first two weeks after deportation,« Ofelia Gress de Vargas explains. This slim woman is the manager of a shelter for migrants, financed by the Salvation Army. Usually the Mexican immigration authorities receive the people who have been deported, and provide information. The deportees are expected to look for work, or return to where they came from within Mexico, but in the era of the economic crisis this is all a little more difficult. »There are 50,000 unemployed people in this city. It is extremely difficult to find work here at the moment,« says Victor Clark Alfaro. So many of the deportees end up on the street after the first two weeks are up.

The sun glitters on the dribble of water in the riverbed as it flows quietly through the city. Forty years ago the water could still flow freely through Tijuana, but in the mid 70s it was corralled in a wide concrete basin that now dominates the city. »Around a thousand people live in the concrete riverbed. How many it really is, no one actually knows exactly. Sometimes it’s more, sometimes fewer.« Victor Clark Alfaro has visited the inhabitants of the riverbed. He’s sure of one thing though, »There are lost cities down there. If the people of Tijuana knew about it, it would be a huge scandal.«

»The Mexican police are worse than the American, they hunt us like crazy,« Gerardo, 25, is in the middle of gathering together his few belongings. A police patrol was in the riverbed a few hours before, and they took the people living there into custody. Gerardo only just got away over the freeway. »They don’t bother asking our names, and if we have documents or money, they just take it from us. They beat us with their nightsticks and throw food and medicine in the riverbed.«

Gerardo has previously spent a year as an unauthorised immigrant in the USA. Then he was deported. The corruption of the Mexican police is well known, with human rights activists complaining repeatedly about it. The deportees are usually taken into custody with no clear explanation. They are taken before a judge, who decides on the level of their fine. Then they spend up to 36 hours in police custody. »These people are simply made illegal by the police and legal system, and hunted in their own country,« Victor Clark Alfaro explains.

In a report from 2008, he describes 187 cases of police wrongful conduct, which were reported to him between August 2007 and April 2008. But most cases aren’t even reported, for fear of provoking an even more severe reaction from the police. The police argue that their behaviour is a preventative measure that combats criminality. Many of the migrants living in the riverbed would engage in theft, and hang around the street, deputy chief of Tijuana police, Aurelio Martinez Paz, says. Juan Carlos pulls his trouser legs up to the knee. A bruise. He didn’t manage to get out of the way of the police in time. His eyes begin to tear up. »Nobody comes to us and asks why we’re living on the street. I haven’t done anything wrong.«

Books and newspapers are stacked on the desk. Victor Clark Alfaro looks almost lost behind them. »Let’s not lie to ourselves,« he murmurs, »there are criminals living in the riverbed too.« There are lots of reasons people get deported from the USA. In most cases it’s a trivial offence, such as a traffic violation. People charged with serious crimes usually sit out their sentences in a US prison, before being deported to Mexico. »Former prisoners and gang members live in the riverbed, but there are innocent people too,« Victor Clark Alfaro explains.

The riverbed is a lawless place, where the strong survive. That’s why a lot of the people there form groups, to protect themselves. Life on the street is hard, some don’t make it, falling to drugs. Some of the people you see in the riverbed don’t live there. They go there to sell drugs.« Many of the deportees sniff glue; it’s the only drug they can afford. The dream of being able to return to the USA has over time become a hazy drug trance in Tijuana’s dirty riverbed.

During the day, they look for work in one of the vegetable markets, or clean cars waiting to cross the border into the USA. This earns them a few pesos to buy food, or finance their addiction. The politicians have been looking for a way to solve the problem of the people in the riverbed. »They want to offer them work, and get them off the street,« Victor Clark Alfaro says, »But the problem is that huge numbers of people are deported to Tijuana every day, and so new people are constantly arriving in the riverbed. I don’t know if that’s the way to solve this whole problem.«

Juan Carlos and Gerardo want to leave life on the streets behind them, whatever it takes. They avoid drugs and alcohol. Juan Carlos says that if he doesn’t make it over the border into the USA soon, he’ll return to his home town in the south of Mexico. »There, life is better than in Tijuana after all,« of that he’s sure.